At the time, there was no funding for video - however, we listened intently, as this was right up our alley after working for more than half a decade at the Swedish Civil Contingencies Agency - www.msb.se, (formerly known as the Swedish Rescue Services Agency - SRSA - www.srv.se).

About half a year later, in late summer of 2015, Chief Peter McBride calls again, and says he is now in

quick need of a video contractor, and that he has secured funding from... the US Department of Defense.

Only weeks later, we were once again reunited with many friends from all over the world, pioneers and instructors in the Fire Behavior field like Shan Raffel, John McDonough (Australia), Karel Lambert (Belgium) and many more.

In the latter part of October 2015, we filmed and documented the dedicated students within the Ottawa Fire Service eagerly pouring over practical and theoretical instruction in CFBT - Compartment Fire Behavior.

This course was to be the first step in a grander vision designed by Peter McBride to bring Canadian fire services to a new understanding of Modern Firefighting - one that encompasses both the gems of traditional Swedish / European firefighting, and the best of traditional North American firefighting.

Two weeks later, Phase 1 of the project was over and I testify that all of our gear smelled like BBQ:-) The best part for us, was that we learned tons of new material, and also fortified what we already knew from some of the best fire instructors in the world.

The work of From Knowledge To Practice will soon become the basis for an international US published e-learning course, developed under the guidance of DoD´s main contractor Battelle Memorial Institute.

The work is ongoing, and the first phase of the project is expected to be released in October 2016. The e-learning company responsible is Resonate E-learning in Washington, and the main video contractor is BT Video Productions!

Learn to tell your stories of Lessons Learned on video

What does it take to create a successful Work Place Safety Program?

A documentary portrait of an Artist: Surrealist Painter in the Canarian Archipelago

Working with Green Screen and Motion Animation for Special Effects

How to light for Technical Videography 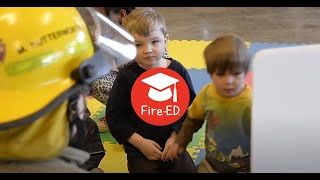 From Fire Fighting to Fire-Ed...

A Video Team for the Fire Ground

Professional Memberships in the Vancouver, BC Area

Learn to tell your stories of Lessons Learned on video

What does it take to create a successful Work Place Safety Program?